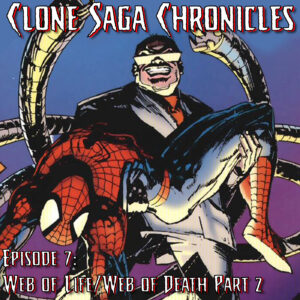 Zach, Gerard, and Bertone tackle the 5th month of the saga. The latter half of Web of Life and Web of Death plus one of the greatest issues ever of Unlimited (Not Really).
Re-Release Date: 12-25-2011.
Cover Date: February 1995
Release Date Starting: December 6, 1994
It’s the “Final” Doctor Octopus story! Peter is a Dad! He’s Dying! Ben fights Grim Hunter, and he gets killed. Also, Doc Ock is Killed. By Kaine. He killed the other guy too. Also, MJ takes on terrorists at the World Trade Towers. You read that right.
Issues this Episode Covered:
Web of Spider-Man 121 (Web of Life Part 3)Amazing Spider-Man 398 (Web of Death Part 3)Spider-Man 55 (Web of Life Part 4)Spectacular Spider-Man 221 (Web of Death Part 4)
Spider-Man Unlimited 8


Original PodOmatic Tag: “Two shall die! Plus, a plot about the World Trade Centers in “Unlimited” with some of the worst writing EVER!”

Zach Joiner is the co-founder of the Spideydude Radio Network and the Co-founder of the website that hosts it, Spidey-dude.com. He is the Host of Spideydude Experience and Clone Saga Chronicles, and has been a co-host on the other Spideydude Network of shows such as Make Mine Mayday and Spectacular Radio. He has two dogs, a daughter and a lovely Fiancee.
View all posts by Zach Joiner →